Without more fresh water, the Everglades can’t build the land needed to protect our coastline

For those of us living along the lower east coast of Florida, the Everglades is a backyard wilderness, the source of our drinking water and an important hurricane buffer.  It is also a flat, low-lying wetlandwith an imperceptible slope, making it quite vulnerable to sea-level rise.

Once a 50-mile-wide “River of Grass” extending from Lake Okeechobee to Florida Bay, the Everglades is now divided by canals and levees into units we know as Everglades National Park, Big Cypress National Preserve and the Water Conservation Areas.

Now half its original size, the remaining Everglades ecosystem still encompasses more than 2.5 million acres and consists of a variety of habitats that are adapted to extremely low nutrient levels and a range of flooding conditions by either freshwater or saltwater.  Scientists have been investigating what is likely to happen to the Everglades when those flooding patterns are altered by rapid rates of sea-level rise.

Many people assume that as sea level rises, mangroves will gradually migrate landward, replacing freshwater sawgrass near the coast.  This landward migration of mangroves and other coastal habitats is well documented, and there is strong evidence that this process has been exacerbated further by water management activities, which reduce freshwater flow from the Everglades to the coast.

It doesn’t take a scientist to see the effects.  Anyone who drives to Flamingo or Key Largo can observe how far the mangroves have advanced inland over the last few decades.

Given that mangroves provide valuable coastal wetland habitat, trading sawgrass for mangroves may not be such a bad thing, right?  Unfortunately, it is not that simple.

The interaction of water, salinity and plants can dramatically affect the integrity and elevation of the soil that supports these habitats.

In freshwater sawgrass marshes and salty mangroves of the Everglades, organic soils (called peatsoils) develop under persistent flooding.  Peat soils are comprised of plant matter that accumulates faster than it decomposes, forming a blanket of sorts on top of South Florida’s porous limestone bedrock.

When we deprive marshes of freshwater, peat soils break down, resulting in soil loss.  In fact, it has been estimated that some marshes in the park have lost as much as 3 feet of soil elevation in the era of water management.

A more complicated and destructive outcome results when freshwater marshes, which are already receiving less freshwater, are increasingly exposed to saltwater before mangroves become established.  An example is Cape Sable, the landmass at the southwestern-most tip of Florida.

In the 1920s, canals were dug into Cape Sable to drain the freshwater marshes but instead facilitated saltwater intrusion.  By the time aerial photography became widely available in the 1930s and 40s, much of this freshwater marsh had disappeared, converting to open water rather than a mangrove forest.

Research by Dr. Hal Wanless of the University of Miami suggested that saltwater accelerated the breakdown and collapseof these freshwater marshes on Cape Sable.  His work inspired scientists from Florida International University led by Dr. Tiffany Troxler, the Everglades Foundation, Everglades National Park, and the South Florida Water Management District to develop experiments focused on understanding how and why peat soil collapses.

This research, which is supported by Florida Sea Grant and the National Science Foundation, will improve how we assess wetland vulnerability to sea-level rise and perhaps identify better water or habitat management options.

Through this work and other science, we are learning that a “perfect storm” of sea-level rise, low freshwater flow (because of water management) and saltwater intrusion can cause peat soil to disappear faster than it can accumulate – transforming an affected area to open water, not to mangrove forest.

In the Everglades, collapsed areas appear as large puddles in the landscape surrounded by vegetation.  Over time, collapsed areas of marsh coalesce into larger areas, releasing nutrients once sequestered in the peat soil into the environment where they wreak havoc in the Everglades and coastal waters such as Florida Bay or Biscayne Bay.

Peat soil is to the Everglades as sediments and coastal marshes are to the Louisiana Delta, and loss of peat soil can result in the loss of land.

When such drastic ecological changes occur so rapidly, it is difficult to predict what chain of events will follow.  However, we know that we are accelerating peat collapse and shaping the future coastline of the Everglades under the current system of water management.

Until we restore the flow of freshwater to Everglades National Park, we are short-circuiting the natural transition to mangroves and possibly increasing South Florida’s future coastal vulnerability. 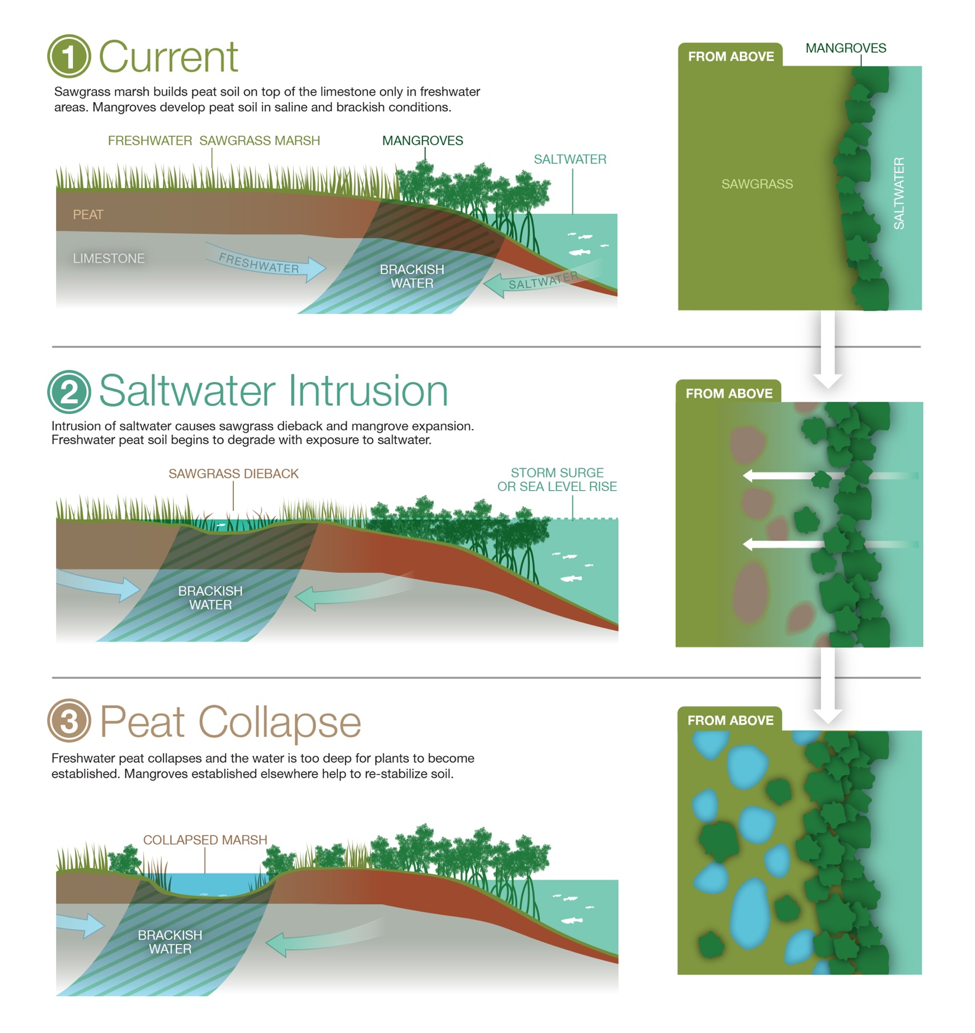 Dr. Steve Davis is the Senior Ecologist for The Everglades Foundation.

It's Human Nature Not To Think About Rising Seas. Here's Why — And What Can Be Done

Rule allowing the fishery for juvenile goliath grouper must be reversed

by Christopher Koenig and Felicia Coleman

It's Human Nature Not To Think About Rising Seas. Here's Why — And What Can Be Done