by Benita Goldstein
in Influencers
0

Given all the rain we’ve had in the last month, a recent FAU webinar was timely.

Entitled “Salty Urbanism: A Sea Level Rise Adaptation Design Framework for Urban Areas” was spot on. The subtitle – “Reimagining Lifestyles On, With, and Over Water” – captured what some experts say is the future of coastal living in Florida.

Jeffrey E. Huber, the Interim Director of the School of Architecture at Florida Atlantic University, has been studying this for years. As both an architect and landscape architect, he brings unique perspectives to the water table.

A native Floridian from Homestead, Huber saw his city wiped out by Hurricane Andrew. He decided to pursue a profession that would enable him to be a problem-solver.

“I truly do think that we need some hope and realism in seeking creative solutions that provide a prosperous and productive lifestyle for the region under these challenges,” Huber said.

“Salty Urbanism” is the brainchild of Huber, Keith Van de Riet, John Sandell and Lawrence Scarpa with others across engineering, planning and at the Florida Center for Environmental Studies at FAU. The idea was to embed ecological processes within urban infrastructure to create a more sustainable and resilient future, “a new urban paradigm,” Huber said.

North Beach Village in Fort Lauderdale was the pilot study in which students, practitioners and faculty at FAU reimagine lifestyles on, with, and over water.

Melding urban design with ecological considerations was Huber’s intent in alternative planning. He broke down the program into three parts.

— “Soft Defense Scenario.” This combined strategies of both hard and soft engineering to mitigate impacts of rising seas and non-point source pollution from urban runoff allowing development to remain largely unaltered. Installation of living shorelines, as well as bioswales and rain gardens in the rights-of-way created high-tide gardens with salt-tolerant landscapes and pervious paving systems. These saltwater landscapes reduce the time streets are flooded. Architectural strategies include allowing first floors to flood – a strategy already finding its way into building codes and architectural plans in coastal areas. 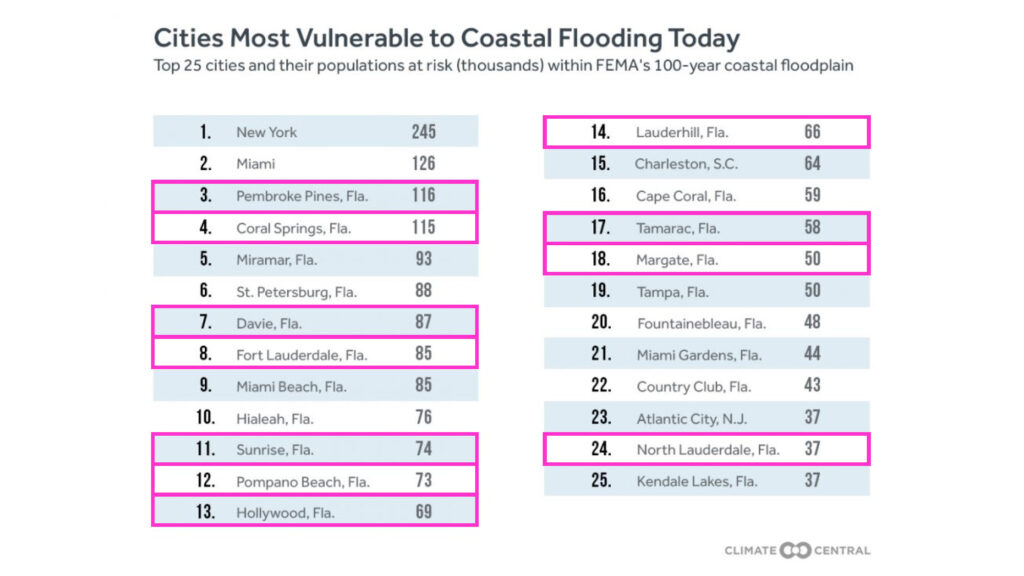 — “Strategic Retreat Scenario.” This envisions relocation to higher ground on the coastal ridge. Development will move to higher ground through Transfer of Development Rights. This includes soft-engineered solutions that can be implemented over time as “rewilding” in both public and private properties. Through these scenarios, students participated in discussions as they pertain to the built environment and lifestyles of residents. Policy and recommendations included a “Department of Unplanning” that can manage urban decommissioning. Additionally, amphibious and floating structures would be proposed within rewilded areas.

Huber noted that while sea-level rise is a more gradual phenomenon, there would be time to assess and plan for the effects. He contrasted this to stronger storms overwhelming the stormwater infrastructure now. Huber says the solution is to build low impact development and green infrastructure. Then a team of engineers, architects, planners, city officials and neighborhood stakeholders can address the future of saturated landscapes, keeping climate adaptation local.

Protection is a multidisciplinary approach. The architectural aspect would mean a retrofit of traditional architecture. Huber gave the example of the Perez Museum in Miami which was raised above the parking area.

This is particularly noteworthy in southeast Florida because the land is low and the soil porous. In this instance, soil was less likely to absorb rainfall let alone king tide and storm surges.

The other type of protection is ecological infrastructure, which Huber refers to as the five toolboxes:

As an example of ecological solutions, Huber mentioned  plants that can uptake and evaporate large amounts of water. He also discussed new techniques to combat the salt erosion of concrete buildings by incorporating fiberglass with saltwater mixed concrete known as seacrete.

Huber described the need for a city to create a “Department of Unplanning” that addresses challenges to the environment. As an example, he referred to mangroves as an “indicator species.” If they are dying, pollutants are at work. He also said governments should create “walkable districts” that would improve a city’s social, economic and environmental assets.

Going forward, Huber said we must use these next 10 years to adjust to the challenges the region faces.

He noted that the most extreme projection by the Southeast Florida Regional Climate Change Compact for sea-level rise is 8 feet by 2100 so we need to start planning now.

Benita Goldstein is a writer in Delray Beach.

“The Invading Sea” is part of the Florida Climate Reporting Network, a collaborative of news organizations across the state focusing on the threats posed by the warming climate.

It’s always darkest before the dawn

Voters approve charter amendment and make Florida the epicenter of Rights of Nature in the U.S.

Voters approve charter amendment and make Florida the epicenter of Rights of Nature in the U.S.