We need the courage to truly tackle global warming

by Harold Wanless
in Influencers, Other
0

We talk a lot about how to deal with global warming and sea-level rise and desertification and ocean acidification.  We do not focus enough on how to solve it.

It is helpful to see how America’s leadership has fared so far.  This graphic (click on link for higher definition) shows the level of atmospheric carbon dioxide that has been measured on Mona Loa, Hawaii, since 1958 by Scripps Oceanography Institute.  Superimposed are the terms of our presidents since JFK. 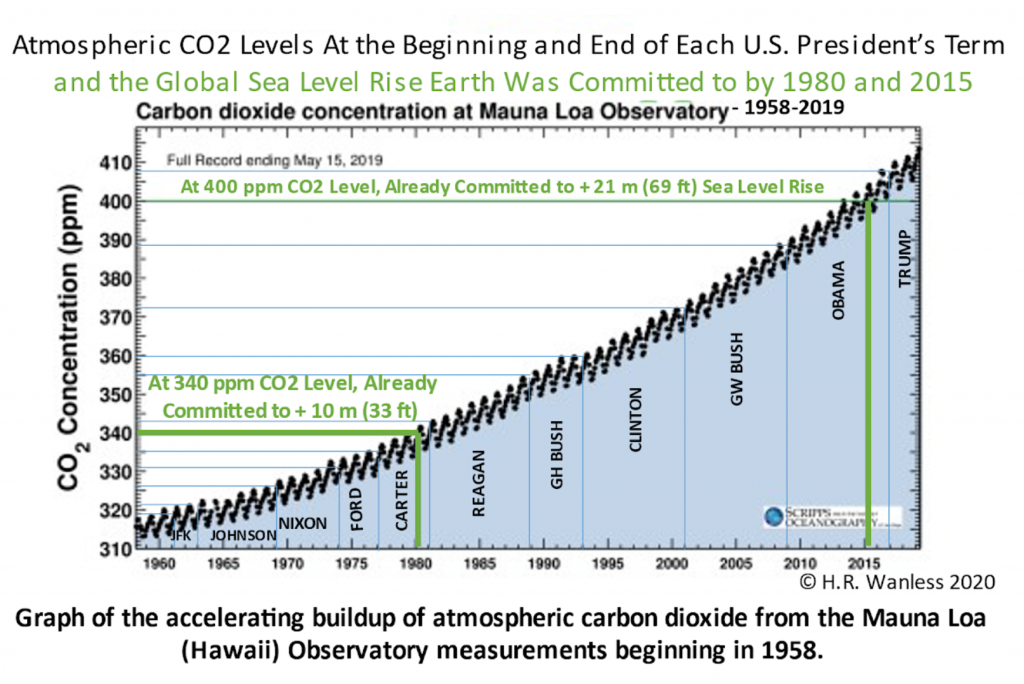 As you can see, global carbon dioxide levels have continued to climb no matter who or which party was in office.  In other words, our leadership (or anyone else’s) has done nothing to slow the increase in carbon dioxide.  In fact, the rate of increase is accelerating.

Since the beginning of the industrial revolution in the 1800s, the United States has been responsible for about 25 per cent of the extra carbon dioxide in the atmosphere even though Americans represented only 4.3% of global population in 2017.  China, India, and other counties are increasing their global warming influence, but the world is still waiting for us to take the necessary leadership and steps.

Before the industrial revolution, carbon dioxide in the atmosphere was at 280 parts per million (ppm) and sea level and climate were stable to slightly cooling.

Two things provide the perspective for what this dramatic increase means.  Superimposed in green are the sea-level rise projected in 1980 (33 feet) and then in 2015 (69 feet) because of increased carbon dioxide levels.

These are based on the global sea levels in the geologic past (Pliocene) when these higher carbon dioxide levels persisted for a period of time.   Sea levels were persistently over 30 feet higher about 3.1 million years ago when carbon dioxide was at 340 ppm.

There were also brief periods as recently as 400,000 years ago and repeatedly before 2 million years ago when sea levels were 30 feet higher than today.

1980 is an important date, because the federal government clearly inquired and learned then that global warming was real and serious, but chose to not do anything about it for the next 40 years.  This was also the time when petroleum companies and their allies began their aggressive 40 years of denial.

There were also brief periods with carbon dioxide above 400 ppm beginning about 2.9 million years ago, and these had sea levels 70 feet or more above the present.  We are now well above 400 ppm (417 ppm last week) and with no global commitment to slow or reverse the rise.

This is where we are headed because of what we have already done.  If we had aggressively taken actions to stop this in 1980, the problem would be about a third to a half of what it is today.   Let us hope that we do not look back in 20 or 40 years and say, “If we have only tackled this problem in 2021, it would have been so much easier.”

There are many solutions.  We must pursue them all now.

Since we have now warmed the oceans so much to cause accelerating polar ice melt, we must first reduce carbon dioxide in the atmosphere to a level where it will significantly begin cooling the oceans.  This will not be easy or quick, but it must be done.

Dr. Harold R. Wanless is Professor of Geography and Regional Studies in the College of Arts and Sciences at the University of Miami, teaching courses on climate and sea level.  He is also on the Board of Directors of The Cleo Institute.

The Business of Climate Change

Elizabeth Plater-Zyberk: Architects are beginning to design buildings that can withstand higher water and stronger winds

Miami-Dade County has its first ‘chief heat officer’; How cool is that?