If we want to reduce heat-trapping gases, we need to distinguish between beneficial and harmful ‘renewable energy’

by William Coty Keller
in Influencers
0

We are running out of time to act effectively on the climate crisis.  Every minute, every ounce of personal and physical energy, every dollar is crucial in the race to keep global warming below 1.5OC increase over preindustrial levels.

So, let’s take a look at the adequacy of various so called “renewable energy” options. We will find that while some forms of renewable energy are beneficial, others are not.

Defining the problem and the solution

The climate crisis is the result of human activity upsetting the balance of the natural carbon cycle. Heat-trapping gases in the atmosphere have two causes: Human caused gas emission (the UP arrow in the illustration), and deforestation and poor soil management that eliminate nature’s ability to remove harmful gases (the DOWN arrow). 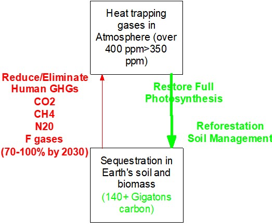 The general solution, depicted in the illustration, is to get greenhouse gases down below 350 parts per million (ppm). The two best ways to achieve that are:

Renewable energy is energy that comes from natural sources or processes that are constantly replenished, according to the NRDC, EIA, and DOE,. The table below lists the major types of renewable energy. On the left are the renewables that have become part of the climate problem because they emit heat-trapping gases (plus some harm soil); on the right are non-emitting renewables.

Biomass is organic material that comes from plants and animals, and includes crops, waste wood, and trees.  The U.S. Energy Information Administration (EIA) points out that biomass is often mistakenly described as a greener alternative to coal and other fossil fuels.

However, recent science shows that many forms of biomass—especially from forests— produce higher carbon emissions. The old idea behind biofuels — a type of biomass — is that they can offer a carbon-neutral fuel source because the emissions caused by burning them have already been offset by the carbon dioxide taken up in their creation.

The Union of Concerned Scientists notes, however, that the farming and machinery used to grow, harvest and take biofuel crops to market emit more heat-trapping gases than the biofuel crops take from the air. Ethanol and biodiesel harm the soil because the way corn and soybeans are farmed relies on heavy doses of pesticides, synthetic fertilizer and a monoculture farming practice that depletes microbes needed for healthy soil.

This leaves the soil susceptible to erosion. It also makes soil unsuitable for farming healthy produce and takes away its ability to capture and store heat-trapping gasses. Biofuels are wreaking havoc on both sides of the up/down illustration.

It is important to recognize that all forms of biomass emit heat-trapping gases when burned. Others, particularly biofuels, also degrade soil health. We need to stop using them.

Zero emissions, not renewability, is the important property for our energy sources

To eliminate human caused emissions, the technical solution is pretty much agreed on by the experts (Project Drawdown, Union of Concerned Scientists –Solutions. Bill Gates- How to Avoid a Climate Disaster). We must reduce energy consumption. We need to electrify almost everything and generate all our electricity from zero-emission sources of energy.  Everyone must understand what those sources are.

Project Drawdown is the result of meticulous research by leading scientists and policymakers from around the world. They detail the 100 most substantive solutions to the climate crisis. Seven zero-emission energy sources are included in the solutions. They are listed in the table below.

The wind, solar and geothermal sources need no explanation. However, small hydropowersystems are worthy of note because they capture the energy of free-flowing water, without using a dam. They can replace dirty diesel generators with clean electricity generation.

Smaller in-stream turbines are different. Placed within a free-flowing river or stream, they capture water’s kinetic energy without creating a reservoir and its repercussions. The underwater analog to wind turbines, their blades rotate as water moves past.

The Union of Concerned Scientists and Project Drawdown recognize what they call the “nuclear dilemma.” Nuclear power is expensive and creates radioactive waste, but it has the potential to avoid emissions from fossil fuel electricity. So, nuclear power must be allowed to compete with other zero-emission sources.

Nuclear power has never killed an American. Fossil fuel pollution is killing Americans every day and that number is increasing with climate related disasters.  On a personal note, I must (as a Navy veteran) add that nuclear power has driven U.S. Navy vessels, including ships the size of cities, for 75 years without serious incident.

What about Hydrogen?  Hydrogen itself is not an energy source, but hydrogen fuel cells are an energy source that produce no heat-trapping gas emissions.  They will be valuable (if not essential) to power aircraft, long haul trucks and other modes of transportation that will not be solved by electric motors due to battery/range constraints.

What matters is the source of energy used to create the hydrogen and store it in the fuel cell.  Hydrogen fuel cells are beneficial if the hydrogen is created and stored by using zero emission energy sources (wind, solar, geothermal, nuclear, small hydro).

What to do with this information?

We can all be part of the solution.  Here are some ideas for action.

Stop emitting heat-trapping gases and improve soil management. Given the urgency of the situation (IPCC 2018: severe economic and humanitarian crises by 2030 if we don’t take bold action), a radical shift in thinking is required.  We must abandon certain renewable sources of energy. We should commit to not uttering the term “renewable,” and when others use the term, take their remarks with a grain of salt.

Consider giving up the use of your fireplace.  Burning firewood (or any biomass) emits heat-trapping gas and contributes to the problem. If you use the fireplace to heat your home, consider using an electric heat pump and ideally power your home from solar energy (community solar or your own rooftop solar).

Stop supporting campaigns for “100% clean and renewable energy.” While some of these programs have produced marginal improvements, they are not effective enough to get us to a 70% reduction of emissions by 2030.  Instead, encourage the use of resources — including political capital — on programs that implement effective policies such as low carbon portfolio standards.   These are a more effective and affordable way to reduce carbon emissions because they require utilities to purchase low carbon electricity produced fromzero-emission sources.

Support Carbon Fee and Dividend. A national price (a fee) on emission, is the fastest and most equitable way to reduce our nation’s emissions.  It’s equitable because the dividends are returned monthly to households and help low and middle income families pay for the rising costs stemming from the fee.

Let’s re-purpose and re-name government agencies (for example the National Renewable Energy Lab, and DOE’s office of energy efficiency and renewable energy)  to focus on mitigating the climate crisis instead of promoting renewable energy programs.

The plant-rich diet is #4 of Drawdown’s 100 solutions.  As Zen master Thich Nhat Hanh has said, making the transition to a plant-based diet may be the most effective way an individual can stop climate change.

We also can stop subsidizing farmers to grow corn and soybeans to make biofuels. Instead, we should be paying farmers to store carbon, help the climate and save farms.

We should understand the solutions that farmers could employ. A few of them are shown here.

Carbon aside, the advantages of Silvopasture are considerable. First, farmers and ranchers would benefit. Livestock, trees, and any additional forestry products, such as nuts, fruit, and mushrooms, generate income on different time horizons. The health and productivity of both animals and the land improve.

It makes sense to incentivize silvopasture and regenerative agriculture instead of the madness of paying farmers to grow corn and soybeans for biofuels.

We can act in our own yards and neighborhoods. Using electric or battery operated landscape equipment eliminates the pollution from gas and diesel fuels.

Natives also fight off the loss of diversity through their long-established relationships with the local insects, birds and other wildlife.  Replacing lawns that use fertilizers can reduce heat-trapping gas emissions. Nitrous oxide emissions (including those from fertilizer) are 300 times more potent than carbon dioxide.

Projects that replace parking lots and other spaces with native trees and shrubs can work wonders for our communities. Afforestation, creating new forests where there were none before, is Project Drawdown’s #15 solution for the climate crisis.

Some forms of renewable energy can help solve the climate crisis, but others contribute to the problem by creating emissions and degrading our soils.  Focusing on renewables distracts us from the urgent task of STOPPING all emissions, restoring full photosynthesis, and improving the management of our soil.

Let’s focus on zero-emission sources of energy (wind, solar, geothermal, nuclear, and small hydro) and beneficial farming and land management practices.  We don’t have time or energy to waste. There is plenty for us all to do NOW.

William “Coty” Keller is an ecologist, working to conserve and restore the natural relationships among living things and the environment.  He is a Vietnam combat vet whose navy career included command of two ships and assignments as professor of national security affairs at the Naval War College.  Coty lives and works in Port Charlotte.  https://ecopapak.org/