FAU poll shows Florida Democrats, Republicans and Independents are concerned about the effects of climate change on future generations

by Contributors
in In The News
0

Floridians from all major political parties believe climate change is real and are concerned about its impact on future generations in the state, according to the second Florida Climate Resilience Survey, conducted by the Florida Atlantic University Center for Environmental Studies (CES) in FAU’s Charles E. Schmidt College of Science, and the Business and Economics Polling Initiative (BEPI) in FAU’s College of Business.

This quarterly statewide survey shows that 86 percent of Floridians believe climate change is happening, including 81 percent of Republicans, 91 percent of Democrats and 87 percent of Independents.

Age appears to play a role in how Republicans in Florida responded to this question, with those 18-34 years old (52 percent), and those 35-49 years old and 50-64 years old (both at 47 percent), much more likely to say climate change is largely caused by human activity than those 65 and over (31 percent).

“With a strong majority of Floridians [70 percent] saying climate change has them concerned about the well-being of future generations in the state [up slightly from 68 percent in the first FAU Florida Climate Resilience poll in October 2019], it makes sense that Floridians support policies to tackle the issue,” said Colin Polsky, Ph.D., director of the FAU Center for Environmental Studies, and lead author of the study. 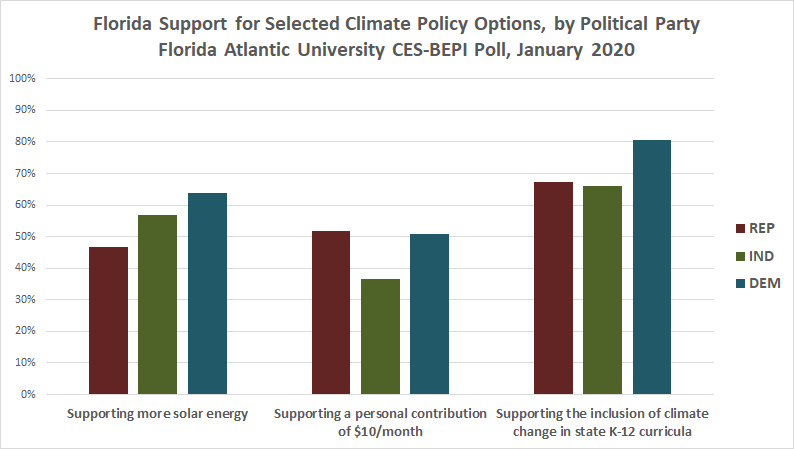 For example, 56 percent of Floridians (including 64 percent of Democrats, 57 percent of Independents and 47 percent of Republicans) identify solar as the primary form of energy production that the state should be supporting for the future. This support for solar has risen five points since scoring 51 percent in the first survey.

In addition, 72 percent of Floridians either strongly support or support teaching the causes, consequences and solutions to climate change in the state’s K-12 classrooms (up four points from 68 percent in the October poll), including 67 percent of Republicans (a noticeable 10-point jump from 57 percent in October).

“Floridians believe that our natural resources shape our quality of life,” Polsky said. “So, it is not surprising that they support protecting our natural and built landscapes from the negative effects of climate change.”

Only 33 percent of respondents agree or strongly agree that Florida’s government (state, county, and municipal) is already doing enough to address the impacts of climate change. However, that represents a five-point jump from October’s poll, fueled by 45 percent of Florida Republicans in January approving of the state’s climate change policies to date.

“These trends in climate change approval ratings suggest that Republican Gov. Ron DeSantis’ support of environmental issues since taking office in January 2019, which many view as a break from the national GOP, may be paying political dividends already,” Polsky said.

The survey was conducted in both English and Spanish from Jan. 7-21. The sample consisted of 1,044 Floridians, 18 years of age and older, with a margin of error of +/- 3.0 percent.

The data was collected using an online panel provided by Dynata. Responses for the entire sample were weighted to adjust for gender, race, income, education and region according to recent U.S. Bureau of the Census data.

It is important to remember that subsets carry with them higher margins of error, as the sample size is reduced. Survey results and full cross-tabulations available upon request. For more information, visit www.ces.fau.edu/ces-bepi/ or contact Colin Polsky, Ph.D., at cpolsky@fau.edu.

The Florida Center for Environmental Studies (CES), founded in 1994, is an FAU unit designed to advance Florida’s sustainability on wetlands ecology, coastal resilience, and sustainable energy, through strategic research, education, and community engagement activities. To this end, CES employs 13 full-time faculty and staff, several part-time staff, plus a coordinated group of graduate and undergraduate students, actively managing about $800,000 in external grants and contracts each year.