by Nasser M. N. Alshemaimry
in In The News
0

The theory that substantial energy can be extracted continuously for 24 hours from the perpetual current of Florida’s Gulf Stream appears obvious to those who study hydrokinetics, yet until now the goal has been elusive.

Other forms of clean energy may seem to be similarly perpetual, but they are not.  The wind blows, dies down and eventually gusts again. The sun rises and sets.  Tides wash in and flow back out.  The energy they create must be stored somewhere until the source cycles back on again.

Meanwhile, the Gulf Stream keeps flowing.  A natural phenomenon throughout recorded history, it will be here for a long time to come.  In certain sections, its velocity has been measured at more than 300 times the rate of the Amazon River—approximately 5.6 miles per hour, according to the National Oceanic and Atmospheric Administration.

The quest for viable ocean current-generated power was envisioned by the U.S. Department of Energy, which created three National Marine Renewable Energy Centers to advance responsible development of marine renewables.  Thanks to years of research from Florida Atlantic University’s Southeastern National Marine Renewable Energy Center, energy pioneers and scientists know the Gulf Stream’s powerful current could realistically offset a significant percentage of fossil fuel use, and even that of newer alternative energy sources.

Still, no one had proved it until OceanBased Perpetual Energy demonstrated on May 28 that any turbine with a rotor and a powertrain regardless of size submerged in the Gulf Stream can produce electricity for a perpetual 24 hours without intermittency.

Now armed with proof of the Gulf Stream’s capability, OceanBased is planning further investments over the next several years by carefully preparing to install underwater infrastructure that could initially produce as much as 5 megawatts of power.  This formative phase of our long-range plan may include connecting with a shoreline power substation or using the generated electricity for alternative needs, such as seawater-driven hydrogen production or powering underwater server farms.

Scaling upward thereafter, OceanBased is confident we it will fully realize the Gulf Stream’s potential for delivering clean, renewable electricity to America’s power grid and other end users.  Because the Gulf Stream baseload power extracted by OceanBased is perpetual, it requires no unsustainable or environmentally harmful batteries in which to store and resell the energy.

A 2013 U.S. Department of Energy-commissioned study by Georgia Tech estimates the overall power in the Florida Current portion of the Gulf Stream alone to be approximately equivalent to 45 Terawatt hours per year, which is tantamount to the power available from three to five nuclear power plants.

Although ocean current power is still in its developmental stage, a viable product is in clear range.  Start-up costs are being entirely borne by OceanBased and forward-looking investors who recognize the enormous potential for Gulf Stream energy to eventually rival the comparable cost of other renewables.

The calculations are simple:  All other renewable sources of energy work between six and 10 hours a day.  The Gulf Stream current works 24 hours around the clock.  Thus, its superior capability ultimately will reduce capital expenditures and operating expenses for generating comparable amounts of energy, resulting in competitive rates without the need for subsidies. 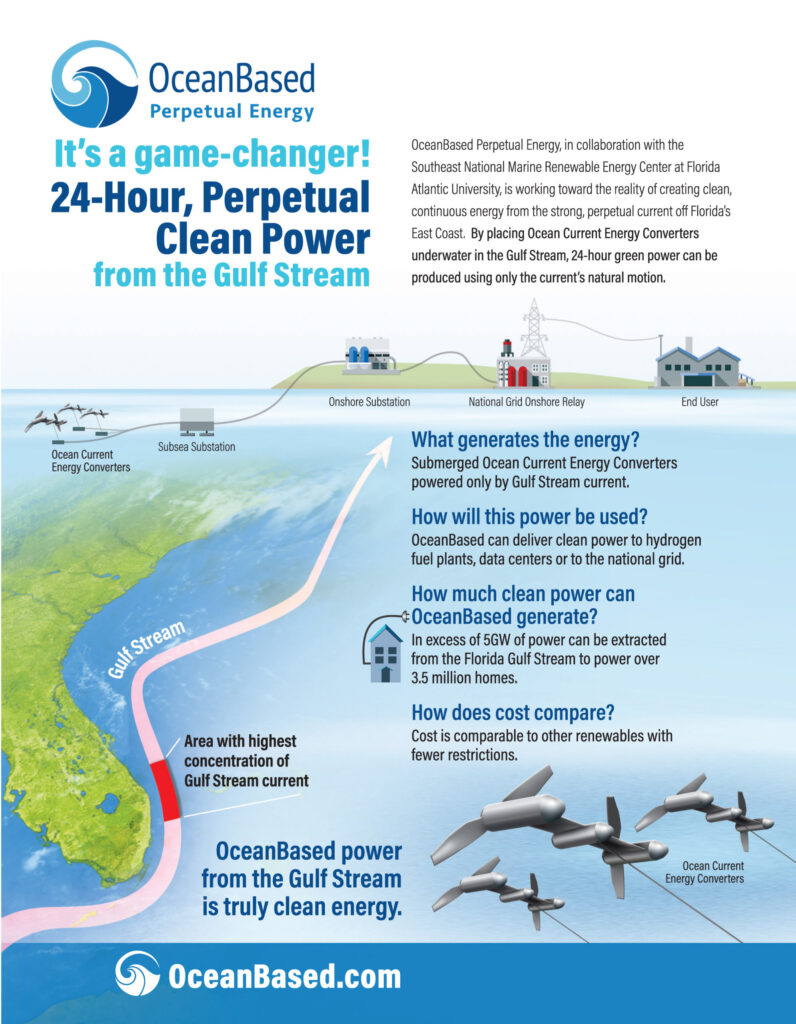 Following the successful late-May demonstration, OceanBased is now poised to deploy Acoustic Doppler Current Profiler  systems in the Florida Gulf Stream to record its current velocities throughout the water column at predetermined locations.  We plan to use six profilers, from which we will retrieve and maintain data over the next two years.

This will give us the opportunity to analyze water velocity patterns and direction, while accounting for potential hurricane and tropical storm effects to determine how close to shore our turbine gearboxes and power conversion equipment can actually be placed in order to leverage optimal water velocity.

OceanBased will situate the turbines as close to shore as possible to minimize infrastructure and impact while maximizing the Gulf Stream’s current, which spans approximately 62 miles at its widest point.

Designing a turbine that works reliably in water is a complex task.  Known as “ocean current energy converters,” three models were tested during our May demonstration.  While each was configured differently, the goal was simply to demonstrate that power could be generated for a full 24 hours, rather than show the virtues of mechanical performance among each. All are capable of doing the job.

Ultimate implementation of the full-scale OceanBased equipment will entail new modeling and design solutions, including:

My passion for clean, renewable energy is based on my belief that reducing fossil fuel dependency and benefiting our climate and the planet for generations to come is an urgent worldwide necessity.  Years of research and successful demonstrations provide ample proof that the ideal solution lies in the never-ending power of the Gulf Stream.

Nasser M.N. Alshemaimry is President and Founder of OceanBased Perpetual Energy.  A former Boeing test pilot, he is also the recipient of the Thousand Points of Light award from U.S. President George H.W. Bush.  Among the first to pioneer sustainable energy in Saudi Arabia, he holds a Science & Technology patent there in the field of hydrokinetic energy.

If facts don’t convince you to change your behavior, check your emotional response to climate and COVID-19 consequences