by John Morales
in Influencers
0

(This column summarizing the IPCC 6th Assessment Working Group I report is adapted from Climate Central, an independent organization of leading scientists and journalists for which I am a collaborator)

The first installment, called Working Group I (WG1), discusses the physical science of climate change. WG1 has 12 chapters and covers a wide range of topics, including climate extremes, regional climate change, global carbon cycles, and more. This report updates the current scientific understanding of climate change, indicating that the impacts of climate change are largely happening the way scientists have expected.

The big story is the growing confidence in the link between carbon dioxide in the atmosphere, rising global temperatures, and accelerating climate impacts. This is supported by updated climate models that use improved socioeconomic development pathways. These models provide more detailed projections about possible future conditions — which depend on choices humans make about carbon emissions.

Planetary warming includes warming in the air and ocean and leads to melting ice in the Arctic, Greenland, and Antarctica, and increasing amounts of water vapor in the atmosphere. Increasing global average temperatures mean rising sea levels, more intense precipitation, and more severe droughts. The warming will continue until CO2 pollution stops. The more additional CO2 we add to the atmosphere, the more warming we will get in the future.

The new report builds on 30 years of previous IPCC assessments. In fact, every assessment report, from the first report in 1990 all the way up to the newly released AR6, established that human activities have increased CO2 concentrations and warmed our planet.

For example, the IPCC’s Second Assessment Report in 1995 stated “carbon dioxide remains the most important contributor to anthropogenic forcing of climate change; projections of future global mean temperature change and sea level rise confirm the potential for human activities to alter the Earth’s climate to an extent unprecedented in human history.”

This summer’s unprecedented heat in the Pacific Northwest, deepening drought and fires in the West, and extreme rain in the Midwest are all consistent with the predictions discussed in earlier IPCC reports. The new report states confidently that the trend toward more extremes is caused by excess CO2 in the atmosphere, and that these trends are highly likely to continue until CO2 emissions are reduced to zero.

The IPCC was established by the World Meteorological Association in 1988 to provide the most comprehensive scientific information about climate change to the international community. The IPCC does not conduct original research, but it assesses and summarizes the current scientific literature on climate change, its potential impacts, and the options for mitigation of future emissions. 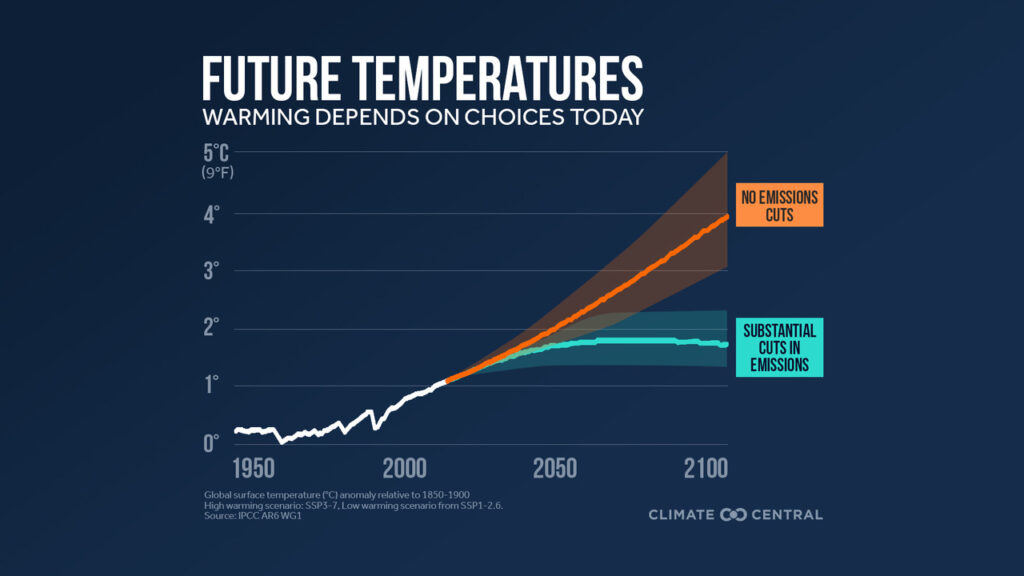 Climate models are an important tool used by the IPCC, but they are not developed by the IPCC. This year’s report features a new generation of models and projections.

Most of the global projections that this report presents have been produced under CMIP6 (Coupled Model Intercomparison Project 6). CMIP6 is a set of coordinated experiments where numerous climate models from around the world are run with the same agreed-upon conditions involving climate drivers like carbon dioxide and methane.  The results of the models allow for a more direct comparison of results. This ensemble approach in CMIP6 is better in many ways — including models with finer resolution, better representation of atmosphere and ocean dynamics, and better representation of how ecosystems take up and release carbon dioxide.

The climate drivers for the CMIP6 projections are based on Shared Socioeconomic Pathways (SSPs). These pathways examine different ways population, education, urbanization, economic growth, and technological development may evolve in the coming decades.

Each pathway gives rise to amounts of carbon dioxide and other greenhouse gases over the whole 21st century that are consistent with the development. The SSPs extend through a range of scenarios that include high CO2 scenarios (SSP3-7.0), and scenarios where CO2 levels and warming stabilize (SSP1-2.6).

The IPCC does not attempt to pick the pathway that society is most likely to take. Instead, the pathways provide a way for people to understand the risks and benefits of alternative policy choices.

Limiting warming to 1.5°C would decrease the risks of food and water insecurity and potentially save global coral reefs from complete devastation. The new report emphasizes that meeting the 1.5°C target is not impossible but that it is becoming increasingly more difficult. It is important to remember that the world doesn’t end if we go past 1.5°C. However, every additional tenth of a degree makes extreme weather, sea-level rise, and climate impacts on nature and people worse.

There is a lot of bad news in the report. Changes that were predicted in prior reports have come to pass and scientists have very high confidence that warming trends will continue. The report also emphasizes the risks of compound extremes, joint occurrences of potentially damaging events that become more likely at higher levels of warming.

On the other hand, we know what is coming and can prepare for it (which will be discussed by Part II and Part III of the report). We also have an increasing number of countries, now including the U.S., as well as states, cities, businesses and institutions that have made commitments to reduce net carbon emissions to zero by 2050. Achieving these goals is possible, especially as wind turbines, solar cells, and electric batteries get better and less expensive. Achieving these goals will also have an economic boost by creating more clean-energy jobs, reducing health care costs, and avoiding the cost of recovering from even worse climate-related disasters.

John Morales is an atmospheric & environmental scientist, and a fellow of the American Meteorological Society. He is chief meteorologist for WTVJ NBC6-TV in Miami, and the longest tenured weathercaster in South Florida.

For this Floridian, there is no safe place to hide from the warming climate

We need to empower the next generation of climate leaders

For this Floridian, there is no safe place to hide from the warming climate