by Mike Abrams
in Influencers
1

Something wicked is coming to Miami. That is the only way that we can describe the seawall that the U.S. Army Corps of Engineers has proposed for Downtown Miami and Brickell with its Back Bay Feasibility Study.

If you have never heard of the Back Bay plan, you are not alone. In an election year in which so many other topics have dominated the media, this threat to our most precious resource, Biscayne Bay, has not received a lot of coverage.

The plan originates from a worthwhile concept: The city of Miami needs to be more resilient at a time when storms are bigger, stronger, and more frequent. Namely, we need to reduce potential damages caused by coastal storms and their surges.

We could not agree more. What we vehemently disagree with is that the main solution proposed by the Army Corps — a 10-foot to 12-foot wall — would dramatically change the landscape of Biscayne Bay forever. 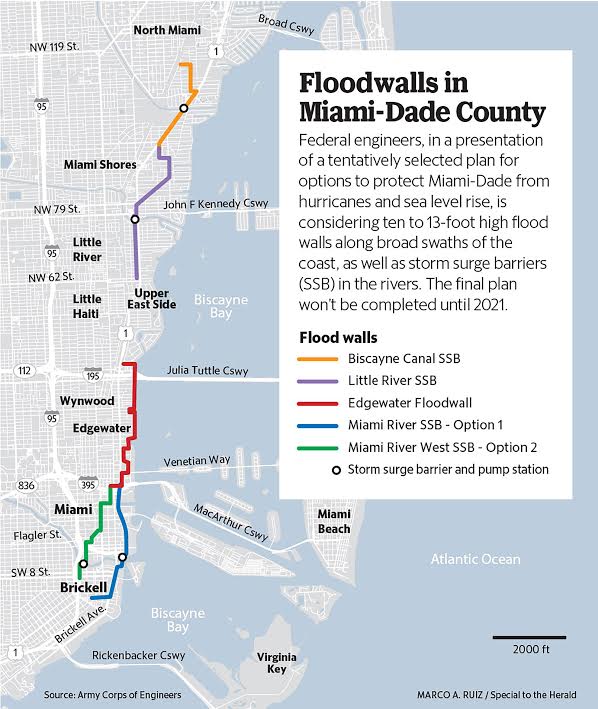 The timing of this proposed wall could not come at a worse moment. It is abundantly clear that the health of the bay is in critical condition. Low oxygen levels, brought on by years of neglect and pollution, are leading to never-before-seen fish kills. The construction zone that will have to be erected to build the Army Corps’ proposed bay wall will undoubtedly add to the threat to habitat that already is plaguing our waters and its wildlife.

For many years, the neighborhoods in the northeast corridor of Miami have worked extremely hard to reinvest and revitalize portions of the city that were in dire need of some love and care.

The Army Corps plan will dramatically change the look and feel of many of these neighborhoods and will result in the acquisition — through eminent domain — of hundreds of properties up and down our most important and unique corridor.

This is precisely the type of community issue that the civic leadership of Miami would have rallied against in days gone by. Instead, the federal government has caught residents all off guard while COVID-19, a spiraling economy, and a presidential election continue to rule our airwaves.

Several coastal cities are dealing with this very issue. Some have come up with smart, beautiful alternatives, where environmental barriers are used to help mitigate coastal threats.

New York City and West Palm Beach (and their breakwater islands), have led with the help of its civic leaders, recruiting architects, coastal engineers and other brilliant minds, to come up with plans that enhance their shores.

The Army Corps already has taken on a similar assignment in Norfolk, Virginia, and the result was what we fear is coming our way: a giant wall that separates the residents of a community from the very thing that drew them there.

The Miami Downtown Development Authority (DDA), Commissioner Manolo Reyes and Mayor Francis Suarez have begun to ring the bell on the scary prospect of a new Downtown Miami wall.

The renderings that the DDA produced as part of its comment letter to the Army Corps give us a glimpse of the threat of a blunt and bland solution for dealing with storm surges. It is important that other elected officials at the federal, state and county levels chime in and take a stance to protect our spectacular views and sensitive ecosystems.

The city of Miami is, after many years of growth pains, a world-class city. People travel from all over the world to enjoy our beautiful beaches and magnificent bay. Thousands of businesses, small and big, have invested in Downtown and Brickell business districts because of their unique beauty.

This is the time for our community to unite and take a stand. It would be a shame if we did not all rally together and force the Army Corps to change course.

“The Invading Sea” is the opinion arm of the Florida Climate Reporting Network, a collaborative of news organizations across the state. It is supported by a grant from the Environmental Defense Fund.

Can Biden deliver on his climate crisis campaign pledges?

Can Biden deliver on his climate crisis campaign pledges?