Terry Gibson: The warming climate threatens Florida’s claim to the title of ‘the fishing capital of the world’

by Kevin Mims
in Other, The Business of Climate Change
0

As part of its series “The Business of Climate Change,” which highlights the climate views of business men and women throughout the state, The Invading Sea spoke with Terry Gibson, who serves as legislative affairs director for the American Water Security Project and has spent most of his career in the fishing and outdoors industries.

Here are some highlights from the interview.

Let’s talk fishing as a Florida industry and economic driver. How has climate change affected these things?

We bill ourselves as the fishing capital of the world and today there’s no better place to catch a more diverse array of species than our state. From bass and bluegills inshore to broadbill swordfish offshore, you can catch it here.

The problem is that climate change really threatens our title, so to speak, as the fishing capital of the world. We’re arguably the most vulnerable state in the Union to the impacts of climate change—we’re already seeing them everywhere.

What climate change really does in the 60,000-foot view sense to the fishing industry is it destabilizes everything. It makes it hard to plan, and you’re not sure where the fish are going to be and when and why. Fishing guides like I used to be—I could basically auction off the best weeks of the year. Now I’m not sure I can really tell you which ones are going to be. It’s very disruptive from an economic sense, but there’s a million more proximate ways that it affects us that are harder to live with.

Flooding overwhelms our master wastewater systems. Most of our sewage systems in Florida are as old as I am. They’re leaky. When you get a bunch of rain or king tide or both, which is often the case now, the water goes right in the pipes and it overwhelms the collection systems and the utility owners have no choice but to dump.

So, you’ve got serious problems with pathogens there and you’ve got serious nutrient loading. And there’s other land-based sources of pollution. The agricultural industry by and large is trying to do everything they can to keep their pollution on property but it still happens and it gets harder to manage when we get 30 inches of rain. So, all that drives extremely rich sources of pollution to the coast during the times of year when the seeds for the algal blooms are there, and they just blow up.

Take a look at all the water bodies from Tampa Bay southward. Three of our most iconic species—spotted seatrout, red drum, and snook—to the best of my knowledge are still closed. And they need to be because the red tide just wiped out this population so we’ve got to give them time to come back.

But if you stop and think of it from a marketing standpoint, what kind of message does that say to somebody in New York who is looking forward to getting out of the snow and wants to come down and catch a few fish this time of the year? It says don’t fish here. It trashes the very resource we love and depend upon, and it drives people away. And in just the most hideous and gross manner.

What about habitat? How has the changing climate affected aquatic habitats around the state?

I live on the Indian River Lagoon and there’s nary a blade of grass from Jupiter to New Smyrna—that’s 150-some-odd miles. Just a few spots left and it’s primarily because of sewage pollution. Those fisheries are woefully diminished and what used to be the most speciose and biologically diverse estuary in North America is now nothing to write home about.

So, again, the harmful algal blooms that are driven by more flooding due to climate stressors, sea-level rise, and hurricanes. They’re wiping out our habitats. Habitats are also shifting though. Mangroves are moving farther and farther north. You can see this really evident up in the Big Bend. I’m most optimistic about the future of the mangroves because on both coasts they’re migrating northward. But what we’re seeing along with that is a shift in the dominant species that we target as anglers.

From the policy and lawmaking side, what can the Florida Legislature do to better protect fisheries and the fishing industry?

In the last two years, they worked on two bills in particular that became the Clean Waterways Act and the Environmental Accountability Act. Governor DeSantis just put forward a budget that’s very generous toward all these water issues.

Florida’s geology is porous. The water is going to come in underneath, and our streets are going to be sewage motes, and they already are—look at Fort Lauderdale and many other places. Next is invest heavily again in Everglades restoration and other water infrastructure and best management practices for the ag guys.

On the federal level, we’d really like to see a major COVID stimulus package that involves water infrastructure and the Everglades.

Kevin Mims, a Florida-based freelance journalist, is the producer of “The Business of Climate Change.” He conducted this interview with Mr. Gibson.

“The Invading Sea” is the opinion arm of the Florida Climate Reporting Network, a collaborative of news organizations across the state. 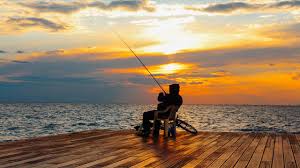 Water management boards have enough people now, just not the right ones

The Business of Climate Change

Jeffrey Huber: South Florida is the ‘canary in the coal mine’ warning others that the warming climate presents serious challenges

Alec Bogdanoff: Floridians need to realize that grappling with the warming climate ‘is going to take sustained effort for decades’

Water management boards have enough people now, just not the right ones