Florida is the leader in the Southeast for solar, but the state’s utilities need to do more to help the U.S. achieve 100% clean energy

by Bryan Jacob
in Influencers
0

It’s not hard to understand why solar energy has become an increasingly larger part of Florida’s energy mix. It’s abundant, it’s clean, and the cost of solar technology has dropped 64 to 82 percent in a decade.

Plus, tapping this resource means new jobs, lots of them. The most recent Solar Jobs Census found that Florida has over 11,000 solar jobs and that figure could quadruple if Congress enacts a 100% clean electricity standard (CES) by 2035.

By powering more of our electrical grid with solar energy, we can also reduce dangerous greenhouse gases and other air pollution from fossil energy, reducing the impacts from climate change.

Fortunately, Florida is stepping up its solar game and now leads the Southeast, unseating North Carolina as the regional leader in installed solar capacity. But there’s much more that needs to be done.

At Southern Alliance for Clean Energy (SACE), our annual Solar in the Southeast reportshave been predicting Florida’s solar rise for several years. The newly released fourth annual Solar in the Southeast report shows Florida almost became the leader in 2020 at 3,909 megawatts  compared to North Carolina’s 3,955 MW on a full-year operational equivalent basis. But with the trajectories of the two states, we can confidently say the transition happened in the first months of 2021.

As the region struggled with the pandemic, distributed solar – solar energy produced at or near the point where it’s used, such as rooftop solar – was certainly affected. However, utility-scale solar had a record year and both sectors continued to grow.

Despite the pandemic, solar technology continued moving at a rapid pace and, of all the Southeastern states, Florida best weathered the storm. In fact, a significant portion of the distributed solar that was added across the region in 2020 was built in Florida.

The state had substantial momentum from the approval of solar leasing arrangements in recent years and the Florida Public Service Commission sustaining the retail net metering policy.

How Florida Stepped Up Solar

First, Florida is a much bigger state than North Carolina. While late to the game, Florida came on strong once solar became one of the least-cost resources to power the grid. And solar growth is widespread across many of Florida’s utilities. 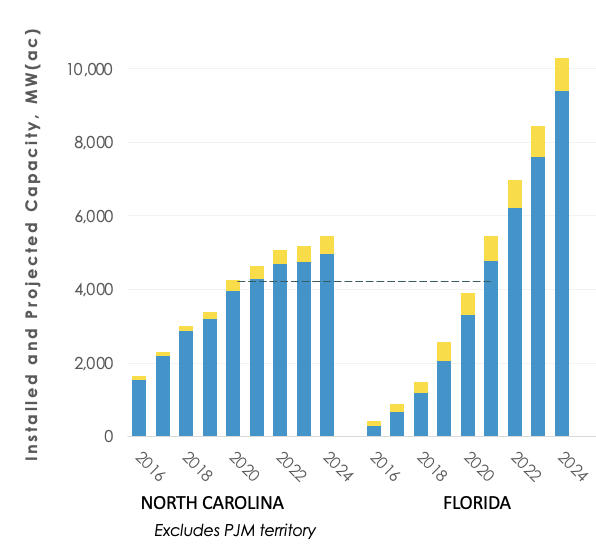 FPL and the recently acquired Gulf Power are pursuing an aggressive plan to install 30 million solar modules by 2030. The SolarTogether subscription-based program is the largest shared solar program in the country at 1,490 megawatts. Duke Energy Florida has begun a similar subscription program, Clean Energy Connection, which will add 749 MW of solar.

Tampa Electric (TECO) continued its rapid rise in a measure we call watts per customer. Of the seven utilities regionally that earned our coveted SunRiser designation, TECO is the only one to earn that distinction in all four years of our reporting.

The SunRiser designation applies to those utilities exhibiting the largest increase in watts per customer solar ratio comparing the prior year with our four-year forward forecast. In this case, comparing 2020 to 2024.

Orlando Utilities Commission also appears on that list of SunRisers along with Gulf Power, as it merges with FPL.

We anticipate seeing utility-scale solar capacity grow at many other Florida utilities over the next few years, including Jacksonville’s city-owned utility, JEA. It’s commissioned 250 MW of solar projects.

However, the JEA will still trail the state’s other major utilities in both utility-scale and distributed solar capacity as well as watts per customer solar ratio. The City of Tallahassee has completed 62 MW of solar development and the Gainesville Regional Utilities is commissioning a 50 MW project.

The Florida Municipal Power Agency (FMPA) is developing 373 MW on behalf of multiple municipal utility members. Those range from munis as large as Orlando with around 250,000 customers to those as small as Newberry with fewer than 2,000 customers.

While Florida’s solar growth is good news, it’s not enough. The rate of solar adoption falls well short of the pace necessary to achieve 100% clean electricity by 2035.

The Biden Administration’s American Jobs Plan calls for the percentage of U.S. electricity coming from zero-carbon sources to reach 100% by 2035.

While the bipartisan compromise on an infrastructure package includes $73 billion for improvements to the power grid, the clean electricity standard (CES) itself was omitted and will have to be enacted some other way.

Another recent SACE analysis, Achieving 100% Clean Electricity in the Southeast, reveals pathways and resource portfolios that would enable the largest utility systems in our region to fulfill a 100% CES by 2035. The primary portfolio we put together for NextEra (FPL & Gulf Power) anticipates 14 gigawatts of distributed solar and 19 gigawatts of utility-scale solar to help meet the goal.

While that amount is 50% more than the utility is planning, this portfolio would require substantially more distributed solar (14 times the business-as-usual forecast).

Nobody said this was going to be easy. But it can be done. It may require rethinking the traditional utility business model. And, no doubt, it will require a combination of carrots and sticks from policymakers. The incremental progress we’re making is insufficient.

SACE is calling on Congress to resolve this with a federal clean electricity standard: 100% by 2035. Fully decarbonizing the power sector, along with electrification, would reduce U.S. greenhouse gas emissions by 70% to 80%, helping fulfill our commitments under the Paris Climate Agreement while simultaneously creating jobs, cleaning our air and water, protecting public health, lowering electric bills, and securing energy independence.

Eric Silagy: FPL is trying to meet the challenges of a changing climate and the needs of a growing population

Eric Silagy: FPL is trying to meet the challenges of a changing climate and the needs of a growing population